A long narrow island, the South Island/Te Waipounamu is the largest of the islands that make up New Zealand. The South Island is located between 40° 30.00’ and 46° 41.00’ South Latitude in the South Pacific Ocean, approximately 1,700km south-east of Australia.

The 12th largest island in the world, the South Island has a landmass of approximately 150,437 square kms, a population of just under 1.2 million people (as at June 2020), and a temperate climate, although the southern end of the island generally has a cooler climate than the northern end. 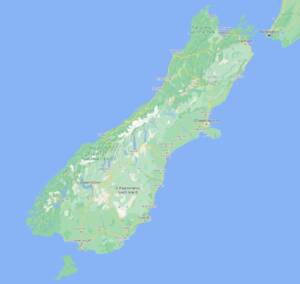 Split in two by the Southern Alps, the South Island is a land of extremes with farming on flat plains to the east, and swamps, primeval forests and fast flowing rivers typifying the West Coast. To the north, are the flooded river valleys of the Marlborough Sounds. To the South-West are the mighty fiords of the Fiordland National Park that force their way many kilometres inland. Speaking of kilometres, did you know that the South Island has just over 4,900km of State Highways? As well as numerous secondary and minor roads.

Highly earthquake prone, the South Island is regularly rattled by earthquakes which have quite literally shaped the island, which sits astride the Australian and Pacific tectonic plates. The extinct volcanic calderas on the East Coast have helped form the natural harbours of Lyttelton, Akaroa, and Dunedin

While mostly temperate with a mean temperature of 8°C, the Southern and South-Western parts of the island are cooler and cloudier than the North and North-East of the island which records much higher annual sunshine hours.

Conditions also vary dramatically from West to East across the island, with the West Coast being the wettest region of the island, and the East Coast, particularly around the Canterbury Plains and the city of Christchurch being the driest

The South Island is divided into seven regions roughly along geological lines as follows from North to South: Tasman, Nelson, Marlborough, West Coast, Canterbury, Otago, and Southland. Each region has its own territorial authority further broken down into local, and city councils.

Note that for our scenic tour purposes, we combine Tasman, Nelson, and Marlborough into one entity (Nelson-Marlborough)